DMR Multipath fading
This is a much simplified description. Fuller details can be found on Wikipedia.

Background
Digital have several advantages over analogue radios. One of the most noticeable is the lack of noise when signals become weak. With analogue radios as the signal becomes weaker random receiver noise increases until the speech is lost in the noise.

Noise is not a problem with digital radios because speech is first converted into data then encoded before being transmitted. On reception the digital signal is converted back to speech using sophisticated software. Because the receiving radio knows the coding system any noise is ignored.

There are two downsides to this digital system;

Digital Silence
The first is that if a signal is very weak and the receiving radio cannot decode enough of the signal nothing is heard at all, the software keeps the radio silent. (With an analogue radio a noisy signal will be heard even if it is unintelligible.)

Digital Multipath Fading.
If the signal reaches the receiving radio by two or more paths and the signal is more or less the same strength from both paths then the software may have trouble decoding the signal which means the radio remains silent.

This can happen because of the different times taken for the signal to travel the short and longer paths. This means the data can arrive out of phase at the receiving radio confusing the software.

Real World Fading
In real world this problem occurs very infrequently and is only usually noticed when there are two receiving radios in the same vicinity and one remains silent while the other receives.

Where only one receiving radio is involved the result is a missed call. The calling party will almost certainly be heard on their second attempt because one or both radios or the reflector will have moved. 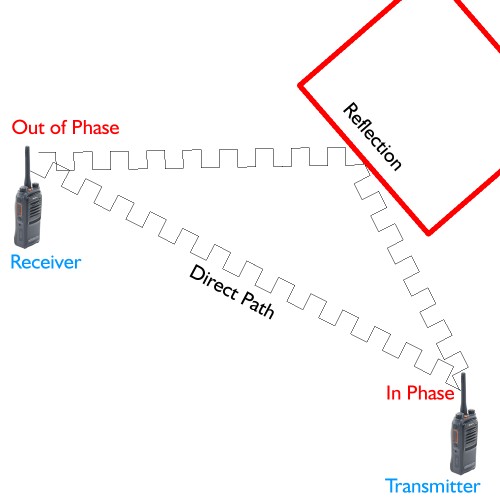