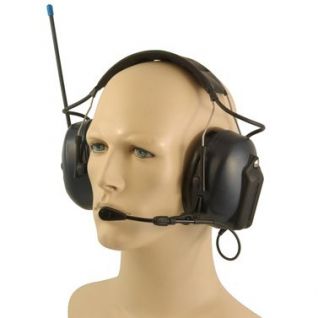 The simplest and lowest cost solution for communications in a noisy environment is Push-to-talk (PTT) radio with communications defenders. This can be supplied in one of two basic forms:

Either system can built ad-hoc starting with only two radios, users being added as and when required minimising the initital capital cost. Quiet area staff can use a radio without a headset.

In both cases the defenders will have around at least 26dB SNR rated protection. They can be supplied helmet attached or helmet friendly versions. They have a noise cancelling boom Mic which allows transmitting from the noisy area. For extensive transmitting from a noisy area digital radios and headsets suppress noise much better an they are outlined in 'High Noise Factory Communications' case study.

Upgrades to either system can include Active-Cut-Off headsets for situations where a users is frequently moves through noisy and quiet areas. Entertainment in the form of in-built FM tuner and Cable connected MP3 players.

Radios can have Lone Worker, Man-Down and Selective Calling features.