More than double the range of your Hytera radio system just by adding one PD985 radio. Ideal for Security, Close Protection and mobile events where installing even a temporary conventional repeater is neither practical or feasible.

The Hytera PD985 is a unique game-changing radio technology because not only will it function the same as any handheld radio but it can also function as a repeater increasing range of existing simple back to back radios system, perhaps more than doubling range depending on how or where it is deployed.

How does it work?
Most existing Hytera PD5, PD6, PD7 and X series digital radios use Pseudo Trunk, the capacity to make two simultaneous calls on a single radio channel. These calls are transmitted alternately in time on two different time ‘Slots’. A free (unused) slot is picked by the transmitting radio and receiving radios will respond to the first active slot.

The PD985 takes advantage of these two Slots receiving on one slot and transmitting the same traffic on the other slot simultaneously. This functions pretty much like a conventional repeater except that only one frequency (radio channel) is used. 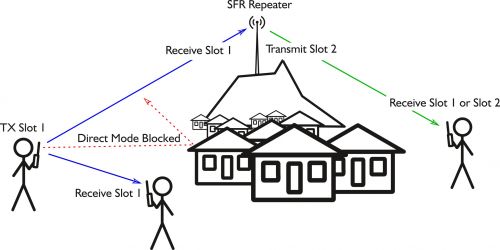 With a conventional repeater your radio is useless if you are out of range of the repeater unless you change to a back-to-back channel. With an SFR repeater there is no need to channel change as you move in and out of Repeater coverage because SFR channels function back-to-back as well.

As an event is staffed, for instance marshals on a hill event, it is often the case that marshals are deployed before a repeater is set up. With SFR radios staff can communicate line-of-site before the repeater is working. Once the repeater is active they don't need to change channel and they will be immediately connected to remote staff and event control via the repeater.

Often a Repeater may not give 100% coverage. Marshalls will need to talk to Control via the repeater. If a marshal is in a repeater black spot it is usually the case they will also be in direct line of sight of another marshal who is. Messages can still be quickly passed to and from Control without changing channel.