+44 (0)1904 630 686
Home > Knowledge Base > How to;
Related Articles
Still Can't Find The Answer?
Email a Question
Phone 01904 630686
Newsletter Sign Up
Knowledge Base
Answers to Your Questions about Radio and Wireless Voice Communications

Sordin Supreme Headset Repair
We are occasionally sent Sordin Supreme (Shooting) headsets for repair only to find there is nothing more wrong than a dead or wrongly fitted battery.

Sordin Supreme Battery Failure
The battery compartment is very unusual in that it looks only large enough for a single AAA battery but it actually holds two batteries. Failure to replace both batteries is the most common 'fault' followed by replacing one cell the wrong way round. 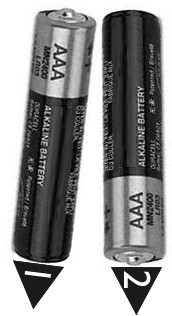 How to Replace the Batteries.
Unscrew the compartment lid and slide out the first battery.

Holding the headset upside down tap the top of the earpiece cup hard onto the palm of your hand to dislodge the second battery. The battery can get stuck so a couple of hard taps may be necessary.

Discard the old batteries and insert the new ones as follows.

First Battery. Negative end in first.
A pencil is useful to push the battery down the cup into its battery holder.

If all that fails then send it to us for repair.