One, Two and Three Wire. What does it mean?.

The Earpiece
(Transducer) which lets you hear incoming radio traffic. These can be in many styles; sitting outside the ear, inside the ear or inside and ear-defender for instance. It may even be a covert Inductive loop type.

The Microphone
This is what you speak into when you make a call. It could be a boom Mic or a Mic in the cable which is clipped to your clothing or a covert Mic concealed in the palm of your hand.

The Transmit button
(PTT, Push to talk) You press this to transmit. This might be combined with the Mic or concealed in the palm of you hand (or both). 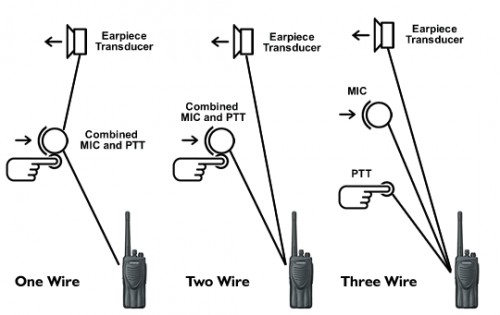 Three Wire Earpieces.
A three-wire earpiece is generally only used for covert purposes. Three wires come from the radio. One to the earpiece, one to the Mic and one to the PTT. These cables are carefully routed under your clothing. This means that in use a call can be made without drawing attention to yourself.

Two Wire Earpieces.
These are popular for security applications particularly in noisy enviroenments. Two wires come from the radio, one to the earpiece. The other cable has the Mic combined with the PTT. This can then be concealed in the hand and brought close to your mouth cutting down the Mic picking up background noise.

One Wire Earpiece.
This is the most popular, most basic, general purpose earpiece. One wire comes from the radio to the earpiece. In this cable is the combined Mic and PTT which is clipped to the lapel area of the wearer. In use the user turns their head to the Mic which is neither covert or good at overcoming ambient noise so it is best suited to quieter applications.