If the user of a radio or headset sounds muffled there are two likely causes;

The Mic is too far from their mouth.
The Mic has a blob of water in it.

The first is easily cured and you are unlikely to be reading this if that was the problem. The water problem is very common with submersible radios and headset used outdoors in wet weather. Motorcycle helmet sets for instance.

The Microphone element is usually enclosed inside the radio or boom Mic and open to the air on the side that picks up your voice. This opening is the Mic Port.  The Mic port is typically only 1mm or less in diameter and in waterproof equipment there will be a thin, flexible waterproof membrane which stops water damaging the Mic element but allows sound to pass.

If a blob of water reaches the Mic port capillary action will hold it there blocking the port.

The cure is to blow or suck the Mic port which removes the blob.

Interestingly this problem seems to  rarely affects non-waterproof radios because the water blob can enter the radio housing and dissipate. 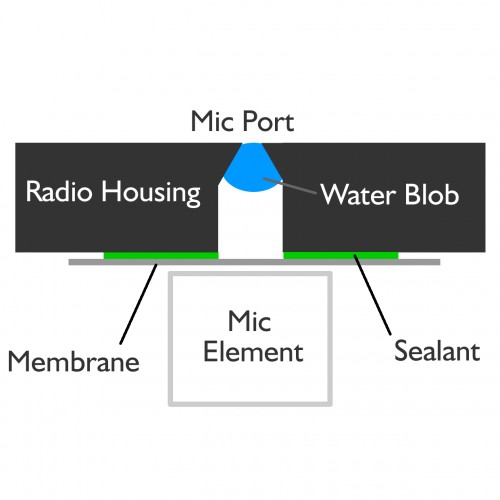