Early models of the Kenwood TK3201, TK3202 and TK2202 were supplied with a NiMh chemistry battery and matching KSC-31 charger

Note Kenwood chargers consists of two parts: The charger cup Marked KSC-31 (or similar) and a plug-top power supply (which does not have the KSC marking).

Later TK3201’s were supplied with a Li-Ion chemistry battery and KSC-35 charger. Any particular charger will only accept the appropriate chemistry battery. The wrong battery just will not fit in the charger.

Note as of 2016 Kenwood have released a charger that will charge both chemistry batteries.


Which Battery?.
Wildtalk has four batteries to choose from.

To narrow them down you first need to know which charger you have. As above:

You can also work out which charger you have from the gold pin arrangement on the batteries: 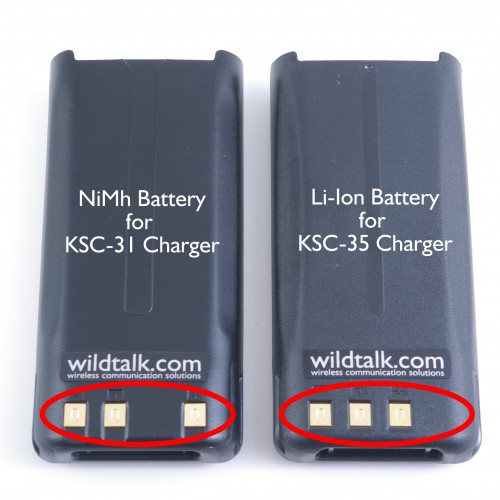 Links to the batteries.