We stongly recommend referring to the manual for both pairing and for 3-way intercom conversation setup.

1. Turn all the headsets on. Press the middel and + button
2. On the first headset.... Enter pairing mode: Press and hold middle button until voice-prompt says 'intercom pairing'. LED flashes RED rapidly.
3. Repeat step 2 above for the second headset.
4. Press centre button once on just one of the headsets, the flashing RED will eventually turn blue and an intercom conversation will be opened.

Pairing a Third headset. You can pair each headset to multiple other headsets.

1. Put either of the initial headsets into pairing mode, as well as the third one.
2. Press center button once on either of the currently 'pairing' headsets.
3. Flashing light will eventually turn blue and an intercom conversation will be opened.

Note
The above describes 'Chain Pairing'. With this method if the middle or 'link' headset is switched off then the outer headsets cannot communicate. With three headsets 'Triangle Pairing' offers a more robust pairing solution as no one single headset is a critical link. To achieve triangle pairing first make a chain paring then finally pair the last headset back to the first.

There are several other pairing configurations including pairing a phone (or phones) to these headsets. The manual give full instructions for these combinations. 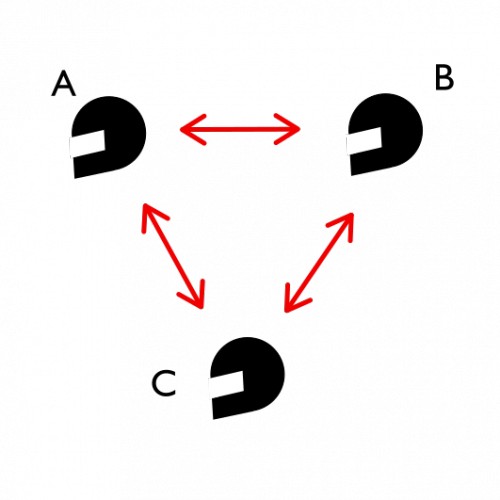